Main Takeaways
Reading Time: 5 minutes The Agile Coach Game is murderous fun for Agile Coaches, Scrum Masters, and Agile Teams. It is based on the game mechanics of Trial by Trolley™, Explosm LLC, and Skybound, a game of moral dilemmas and trolley murder. You are placed in the role of an agile coach deciding which of two teams shows a more dysfunctional behaviour. You can play the game in several variants being either a benevolent or severe coach. The important part is the discussion inside each team and later on the arguing with the coach. Here the learning takes place.

The Agile Coach Game is murderous fun for Agile Coaches, Scrum Masters, and Agile Teams. It is based on the game mechanics of Trial by Trolley (TM), Explosm LLC and Skybound, a game of moral dilemmas and trolley murder.

The Trolley Problem is a moral dilemma well known in Ethics and Artificial Intelligence research. It is based on a thought experiment in Ethics that was first created by philosopher Philippa Foot and then later further developed by philosopher Judith Jarvis Thomson.

The moral dilemma is as follows:

"Suppose you are the conductor of an out-of-control trolley. There is a junction, on the right track are 3 infants, on the left track there are 4 grannies. You have to send the trolley down one of the two tracks, crushing everyone in its path. Do you choose killing the grannies to save the infants?. Or, do kill 3 lifes to save 4 lifes?"

In 2020 a scientific study questioned 70000 people in 42 countries. Country-wide there is a strong preference for sacrificing one life to save 5 lives -- however, the willingness differs.

The AI version of the trolley problem is whether a self-steering car should injure 3 people to save 4 passengers. MIT has a program called Moral Machine, a platform for gathering a human perspective on moral decisions made by machine intelligence. On this site, human test subjects are asked what they would want a car to do if it had to choose between killing different sorts of people.
Brad Templeton made a funny quote on the difference between philosophers and engineers:

While ethics professors address Trolley Problems by debating who to kill, Engineers solve them by fixing the brakes. -- Brad Templeton, Forbes, Feb 21, 2019.

The gaming scenario of the Trial by TrolleyÂ game is there is a group of players, one player is the conductor and must choose to send an out-of-control trolley down one of two tracks, crushing and killing everyone in its path.

Everyone else splits into two teams and tries to convince the conductor to spare everyone on their own track, and to kill everyone on the other track.

There was one of those nights at Play4Agile 2020 in the bar when a group of game addicted agile coaches (see the credit section) decided to set this game in an agile coaching context.

We replaced the conductor with an agile coach or scrum master who is faced with two agile teams with a specific dysfunctional (agile) mindset. The coach has to decide which team is more dysfunctional and should be deserved very very hard improvement activities. On the other hand, each team tries to convince the coach with weird and hilarious arguments that they deserve to be spared and the other team should be punished. 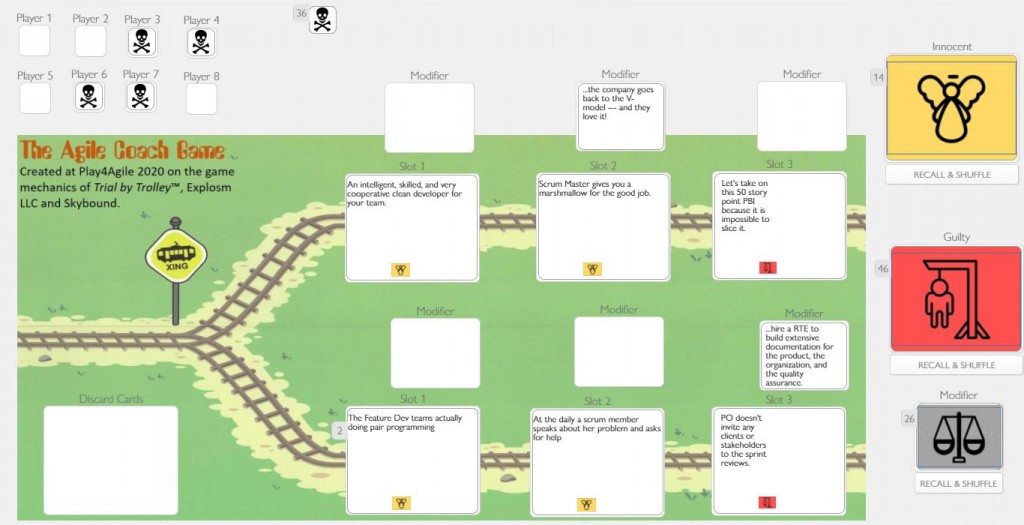 There are several ways you can play the game.

Do not give death tokens to individual team members, but to the teams only.

Play with the number of cards each team can use.

The important part is the discussion inside each team and later on the arguing with the coach. Here the learning takes place.
For the online version use break-out sessions for the team-internal discussion, and come back to the main session for the final arguing.

You can use the game in retrospectives, agile training, and education.

Discuss with the players/participants the consequences of the different variants resp. interpretations: who identifies dysfunctional behaviour first -- the team or the coach, or both? -- To which extend fingerpointing takes place.

I collected our ideas for the (agile) playing cards in a Google sheet and created an online game version.

A shorter version of this post is published on LinkedIn as well.