Main Takeaways
Reading Time: 8 minutes Drama Babe – Open your Customer’s Drama Stage. “The Drama Game” is a Story Telling Game for retrospectives. Objective is to analyse conflicts and hidden and hidden expectations for incidents in your product development life cycle or brand development.

Engage with Telling a Story

"Drama Babe – Open your Customer’s Drama Stage" — Okay, I admit, it’s not as easy to tell a consistent story about storytelling. Nowadays storytelling is ubiquitous in marketing and business. We hear, read, and speak of storytelling all over.
Present day managers and team leaders bolster their storytelling skills to engage their teams — where they actually want to push the team performance!
For marketing departments, business analysts, and content or brand strategy visionarists is storytelling today a way to tie intensively customers and stakeholders to their brand or product.

We store stories in our long-term memory. For a very long time... a really veeeery long time. Even at the age of 50, I still remember my father sitting at bed-time on my bed and telling my a story he created on the fly composed with characters made out of his family: by grandpa, my grandma, my mother, he himself, and my early died uncle Arthur. All these stories started: "When I and your uncle Arthur were little kids...". Even if my father embellished his and my uncle's role in all these stories, only due to these narratives, I got a certain conception of my uncle Arthur today — whom I never met since my uncle died before I was born.

Thus, for now, lets accept as a minimal consensus

Stories do have an affect: they connect people emotionally.

There are several more aspects regarding to stories and fairy tales. Fairy tales help us to answer basic existential questions, like "Who am I?", "What is good life?", "Where do I belong?"
Through fairy tales we learn to navigate reality and survive in a world full of ambiguities and dangers.
And this applies to business environments as well. The only difference is: the intended audience are no kids — instead leaders, employees, customers, and stakeholder!

Therefor, the the sentence above implies:

Storytelling ties customers to your brand and to your product by heart.

If we agree on this position, now the question is "How should a story be told best?" So, jumping on the bandwagon of business storytelling, the answer is straight forward and very simple:
[fusion_fusion_tagline_box backgroundcolor="" shadow="" shadowopacity="" border="4px" bordercolor="#0068B5" highlightposition="none" content_alignment="" link="" linktarget="" modal="" button_size="" button_shape="" button_type="" buttoncolor="" button="" title="Don't tell a dull and boring story!" description="Make the story thrilling, fascinating, catching, and virulent.
Find engaging and appealing characters to which one can relate easily.
Finally, tell your story with pathos and emotions!" margin_top="" margin_bottom="" animation_type="" animation_direction="" animation_speed="" class="" id=""][/fusion_fusion_tagline_box]
Okay... sounds easy, you probably would say. YES, it is easy, because there a two instruments helping you:

Comparative mythology and literary studies showed that all stories told in mankind at all countries and in all eras have two commonalities: they follow a equal dramatic structure; and they have an comparable set of characters. This holds for ancient tribe or shaman tales told to nowadays stories narrated. Almost all stories are made of three basic components:

This dramatic, narrative structure is the so called "Drama Bow":

Contemporary literary novels, short stories, and modern movies have a likewise structure: the drama bow they embed in the of dramatic composition of a James Bond Movie. They start with an impressive opening scene and follow then the drama bow.
As mentioned, ancient epic stories and contemporary novels have similar sets of characters. The characters show comparable role descriptions , so called archetypes. The notion of archetypes stems from the the psychologist Carl Jung.  Jung describes them as universal stereotypes, as archaic patterns, thoughts, and images that derive from the collective unconscious. They have universal meanings which transcend cultures, showing up as dreams, literature, art or even in religion. Although distinct archetypes could theoretically be limitless, however to tell stories, fairy tales, or epics according to the Drama Bow, we basically need the following 10 distinct archetypal protagonists only.
[media-credit id=1 align="alignright" width="487"] 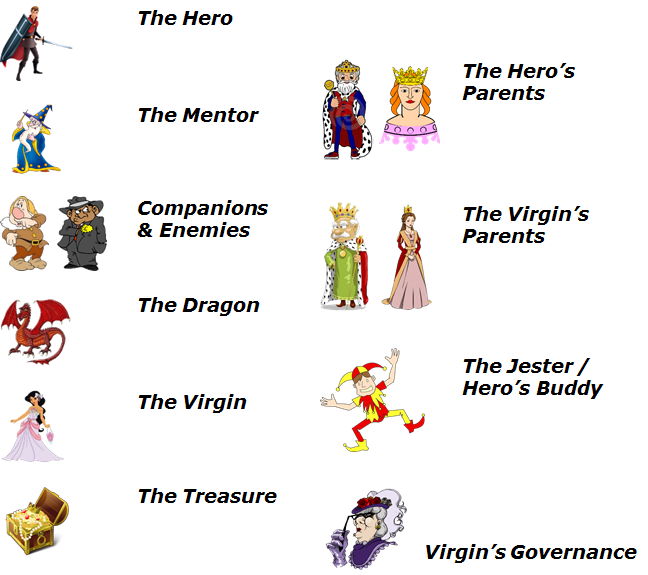 How to Create a Story Well

Define the Story and Keep it Simple.

What is the essential story you want to tell? What is the information you want to share? — Every story we tell must have an objective. This objective defines the story line. Cut any extraneous fact or detail that doesn’t serve that objective. Thus, go straight into the story and do not ramble for a long time to setup context or to tell the past. Do not introduce too many characters as necessarily needed to pace the story line. Keep the story line slim: do not introduce too many branches and loops into your story. Question every detail. Eliminate the interesting, but not mission-critical. Cut all irrelevant data: names, dates and numbers. Get rid of the clutter and keep the story moving forward.

Research all Relevant Available Information and put it into Metaphors.

With every story you start a conversation, with yourselves as well as with others. With your stories you want to communicate. You always communicate with stories. You argue via stories, internally or out loud. You talk back. You praise and you blackmail or denounce with stories.
With your story you want to share a message. You want to give the audience a promotion. You want to give the audience some learnings. — Research the data and facts you need to create your story line and to satisfy your story's objectives.
Line all data in ascending order of necessity to tell and of audience's interest. Transform them into metaphors, thrilling actions and events, and attributes of your protagonists.

Identify parts in your story to which your audience may relate and connect easily or best. Embellish and decorate these points. Go into details of the thoughts of the characters, their emotions, and mental states. Paint in detail the ambiance and environment your characters are faced with: space, time/era, architecture, nature, etc. 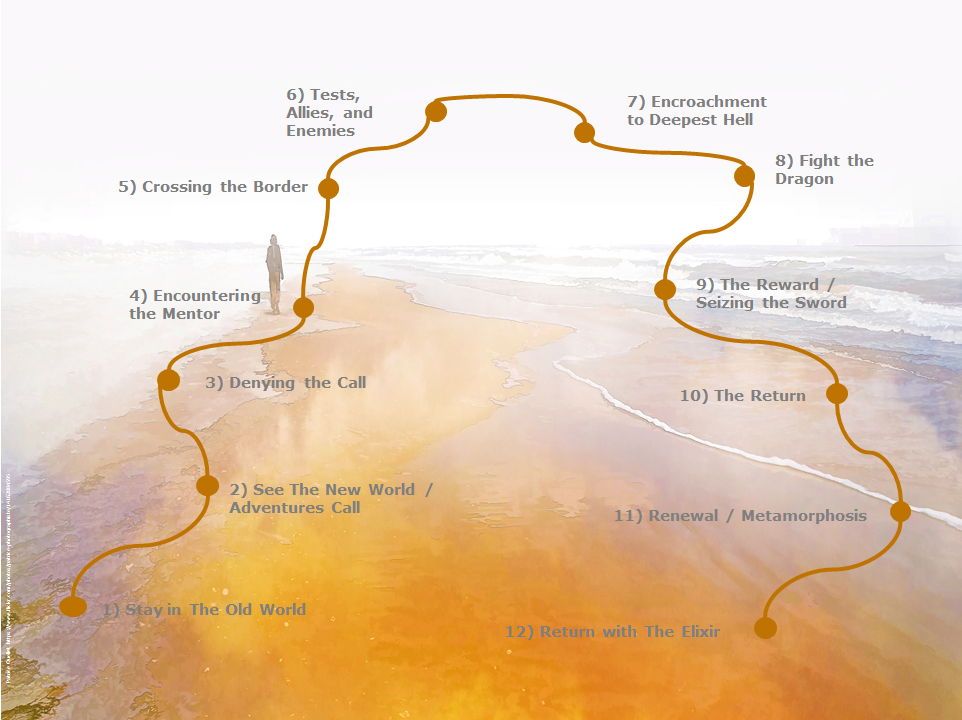 Hero Quest! – “The Drama Game”  is a storytelling game to identify, reflect, hidden expectations and behaviours in certain situations of team members, stakeholders, and other participants of a product development process. Playing the game creates a shared understandings of the reasons of events and incidents happened in the product development life cycle.

The roles of king, queen, prince, princess, dragon, wizard and others are avatars for the challenges your customers, stakeholders, and employees face in the real world. At the same time, the events happening in the world of fairy tales are metaphors for what takes place in real organisations:  succession issues, challenges, flashy conventions and glittering prizes, battles to be fought with competitors, etc.

You play the game in so called retrospectives, with all parties involved in these incidents. Retrospectives are joint sessions with all involved participants to identify what went good, what should be kept, and what should be improved for a certain development time frame.

I presented "The Drama Game" in public workshops at several un-conferences: Agile Coach Camp, Germany #ACCDE14, 06/2014 and #WisP14, Belgium 2014. Discussing with the participants of my session gave me great improvements. Thx to all participants!

For more information on "The Drama Game" see: http://bit.ly/TheDramaGame.