Give Your Colleagues Their Daily Dose Of Appreciation — Bonus, Rewards, and Feedback

Give Your Colleagues Their Daily Dose Of Appreciation — Bonus, Rewards, and Feedback

Main Takeaways
Reading Time: 6 minutes Everybody becomes happy when getting a "Thank you", or be rewarded and be encouraged by a job well done. In the 21.th century business world financial bonus systems do not work anymore to motivate people properly. Instead, by following a few simple rules, you can reward and recognise employees effectively.

Show Your Mate Your Appreciation

Everybody becomes happy when getting a "Thank you". By saying these magical words "Great Work, thank you" or "Done awesome,  you helped me a lot" you place all of a sudden, a smile on the face of your vis-à-vis. Everyone loves to be rewarded and be encouraged by a job well done. 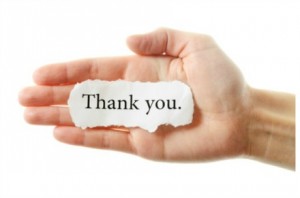 Giving or accepting a praise or a thank-you is a two-dimensional relationship. As the giver, I show my gratitude for taking a benefit of an effort you – the receiver – did for me.
And you – the receiver – feel good. Because of being recognized (by me). You get the message that I do not take your endeavour for granted, that it is special for me. That I appreciate it. And that I appreciate you as a person due to doing me this favour. You feel you have enlighted my life. And most of all, you realize that at a certain moment in my life, you have been important to me.
And only because I say these tiny words "Thank you" to you, I enlight your day. You feel happy. And I had shown you my appreciation, thankfulness, and reverence.
And, notably, I give you a kind of bonus, a reward as a compensation for doing me the favour.

Why The Carrot & Stick Fail

Sadly to say, in our modern business world, this appreciative gratitude of a thank-you is perverted by most bonus and employee performance systems installed. Many companies treat their employees like corporate monkeys, so-called  CoMos: if you give them time to time a banana, they will parry you.
The essential idea behind:

High-performing employees are being rewarded by a carrot, low-performer are be punished by the stick. The final essence: everyone in the company is pushing oneself more to her limits. 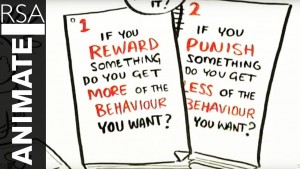 It's up to you to go with this idea of humans and the correlated relationship between a firm and its employees. The idea stems from Taylorism and its notion of Scientific management, a management model introduced in the early 20th century. Taylorism aims to achieve maximum job fragmentation to minimize skill requirements and job learning time and separates execution of work from work-planning.  The managers do the planning, the workers are executing the managerial plans.

However, today in the 21st century we do not live in a world embossed by primarily manufacturing floor shops and processes anymore. Instead, we live in a knowledge-based world. The old-fashioned floor shop is vanishing. It is replaced by either software-driven hardware items — mechatronics, embedded systems, and digital services without any physical representation at the first glance for the end users. At today's production sites, collaboration beyond department silos, social networks, adaptive systems and dealing with complexity are the keywords of 21.th century management.

Furthermore, recent scientific studies showed: the Carrot-Stick rewarding system does not work in knowledge-driven environments any longer. Much worse, it is contra productive because it undermines the high-performers motivation.

Szu-chi Huang, a professor at Stanford Graduate School of Business and her team showed in a recent study, that people being in a competition fare ahead early, strain oneself very much because the victory seems possible. However, when being fare ahead late or at the end of the competition, this leads to a kind of ease, because people feel too secure (to win).

Despite this, bonus systems are still implemented. Despite the fact, that performance-metric-based paychecks do not work. Despite that experts have known for decades that there is no proven correlation between bonuses and performance.

It may come as a shock to many to learn that a large and growing body of evidence suggests that in many circumstances, paying for results can actually make people perform badly, and that the more you pay, the worse they perform.

If money is not an effective motivator, what else? — In general, people motivate themselves by two ways: with intrinsic or with extrinsic stimuli. Money and any other material bonus are extrinsic motivators. In contrast, status and acceptance of a group or autonomy and freedom are intrinsic motivators. The more people do not have to fight for daily life needs  — food, shelter and physical safety — the less important become physical goods. Instead, more and more relevant become immaterial goods like friendship, love, intimacy, trust, and acceptance, receiving and giving affections. This is known as Maslow's Hierarchy of Needs.

On December 29, 2009, Daniel Pink published his now famous book "Drive: The Surprising Truth About What Motivates Us". In this text, he argued 2009 that human motivation is largely intrinsic and that the aspects of this motivation can be divided into autonomy, mastery, and purpose.
In 2011 Google researchers made an internal survey, code-named Project Aristotle, to discover the secrets of effective teams at Google. They found out, that psychological safety is a kind of container for trust and autonomy in the team, and purpose of individual work. If people feel psychologically safe, they are highly motivated and effective.

Jurgen Appelo sum this up

There is a common assumption among managers that nothing works like money when you want to make people work harder, longer, or more efficiently. It’s also often assumed that such an extrinsic motivation works best when implemented as a financial bonus. Both assumptions are wrong.

With the Management 3.0 tool "Moving Motivators" you can easily check, which motivators trigger you, or your team.

Moving Motivators is a card deck game based on the ten intrinsic desires which Jurgen Appelo derived from the works of Daniel Pink, Steven Reiss, and Edward Deci. You prioritise what motivates you, how a change can affect those motivators, and then talk about that change management in the context of your organisation.

How To Reward And Recognise Employees Effectively

Employees who feel appreciated are more positive about themselves and their ability to contribute to the project's or company's success and goals.

When you give people positive affirmations effectively, you reinforce, the actions and behaviors you most want to see people repeat. Your recognition reinforces the employee's understanding of how you would like to see him or her contributions in the workplace.

In many organisations, recognition and financial reward go one for the other. This approach misses the point of recognition because of two issues:

Feedback should come immediately — not after half a year — or worst — after a full year. People need recognition of the extra effort. They need to "feel" it, right at the moment. Feedback should come spontaneously, by heart.  — "Great job!", you remember?

The easiest way to show immediate appreciation are Appreciation Cards. You can create a wall of kudos, proudly showing them all the time. Or you are building a “shout-out shoebox” – a Kudo box – in which you collect the kudos and then have monthly celebrations, where you read out the kudos.

There are several tools available to show appreciation. The range spans from techniques to moderate or facilitate workshops, or to online services and physical objects to show recognition at the business place. 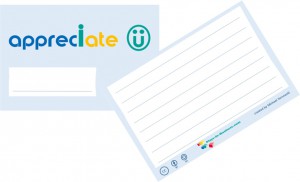 Appreciation Cards – Kudo Cards – are written and public recognition of a colleague for something he or she has contributed to the team. But it’s the recognition of valued work, not financial incentives, that encourages intrinsic motivation within an organisation.

Glint is an app to forster employee engagement and to collect team feedback. 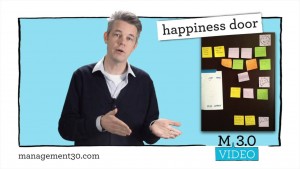 The Happiness Door is one of the Management 3.0 practices. It is a tool to give feedback continuously in workshops, events, or meetings in three categories: things that make attendees happy, things they feel neutral about and things they didn’t like. Usually, it is either an empty flipchart or a collection of post-its. 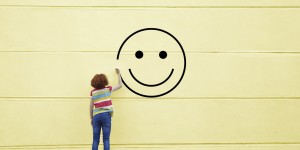 There are several tools available to facilitate, measure and visualize happiness on the project and team level. 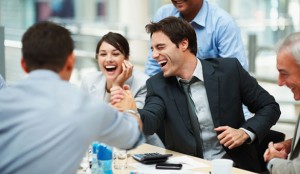 Happiness Hacking 2 – 30 Happiness Strategies To Try in the Workplace

Give people a smile by showing them your appreciation and recognition. Try to stay off from generic emails or general praise cards. They will cheapen the gesture and feel more like an obligation than proper recognition. There are several approaches and strategies to support and achieve people happiness at the workplace level. 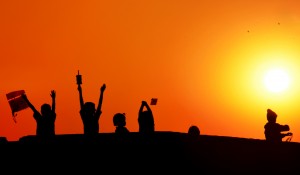 Happiness Index — How to Measure Something So Difficult To Catch

Employes, team members, rate frequently their (daily) happiness on a numeric scale (1–5). This rating is tracked on team or department level to visualize a team’s mood over time and to help teams and management to improve their happiness (Jeff Sutherland, ScrumInc; Hendriek Kniberg, Crisp). 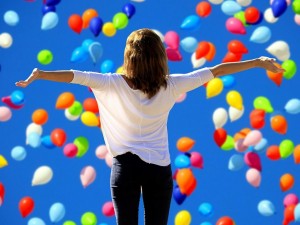 Several tools were developed to facilitate, measure and visualize happiness on the project and team level. This post collects publicly available (free) online tools and methods to assess team happiness. 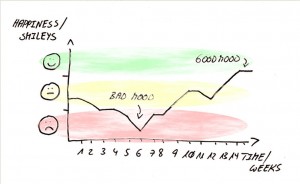 Happy Crisper Index is a free Google Spreadsheet calculate the happiness index for the well-known Swedish consultancy company CRISP in a team or a company throughout a project.

Happyforce is an app to collect team feedback.

MercuryApp is an app to collect team feedback.

Team Happiness Report is an app to collect team feedback. 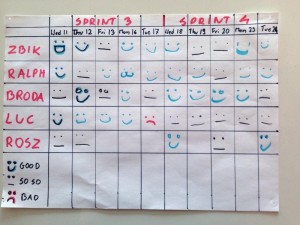 A Niko-Niko calendar is a visual, iconic tool to track the mood of a team. You set up a calendar, and each team member tracks her mood after each working day with a smiley. 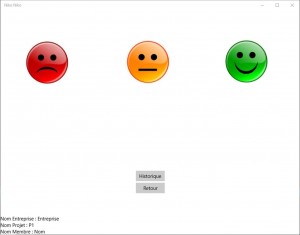 NikoNikoApp (Win10 Microsoft) is an app to collect team feedback. 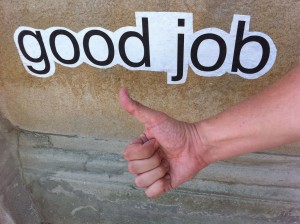 Six Rules To Give Rewards

In most organisations, recognition and financial reward go one for the other. This approach misses the point of recognition: people are motivated by more than money. Six rules by With Jurgen Appelo to give rewards and to increase people’s performance and enjoyment. 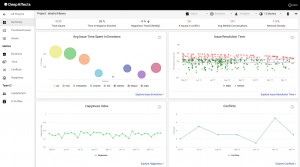 Team Happiness Report is an app to collect team feedback. 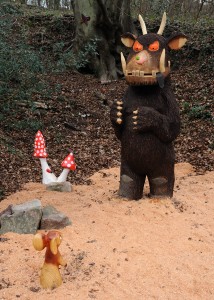 The Gruffalo is a metaphor for fear, dauntlessness, and the luck of the tiny ones when getting great by using their phantasy only. Use a soft toy as challenge cup to show your appreciation. 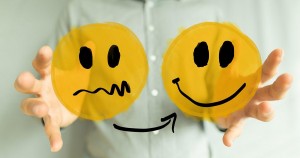 TheHappinessIndex is an app to collect team feedback. 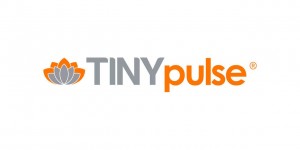 TINYPulse is an app to collect team feedback.

Tools To Show Your Appreciation

There are several tools available to give or facilitate appreciation. The range spans from techniques to moderate or facilitate workshops, to online services and physical objects to show recognition at the business place. 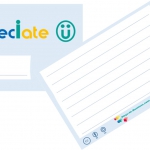