Lean Change Management — What is the Secret Sauce?

Lean Change Management — What is the Secret Sauce?

Main Takeaways
Reading Time: 11 minutes Lean Change Management is based on the metaphor that any change initiative can be thought of as a startup. People affected by change become involved and accountable by co-creating the change. Short and closed feedback loops transfer the reaction of the people involved to continuously adapt the course of change. Borrowing many principles and techniques from the Lean Startup method (Eric Ries) and Lean Stack Machine (Ash Maurya), change agents are able to keep the change plan and model up-to-date by incorporating the latest learnings obtained from the reactions on the work floors.

Do We Need a Different Organisational Change Management?

For over half a century, organisational change management exists as a discipline for its own, lectured at any business school. Albeit, these change approaches have their tremendous drawbacks. John Kotter, Professor Emeritus at Harvard Business School stated that 70-80% of all organisational change initiatives fail: people react with resistance and denial, nor the change is sustainable, after a certain time, people return to the old status quo. ((John Kotter stated this in his book "Leading Change: Why Transformation Efforts Fail" published in 1995. In 2007, Harvard Business Review published the equivocal article. For a discussion on the viability of this failure rate see my blog post "Pitfalls of traditional organisational change management".))

What are the characteristics of these approaches and why do they imply these weaknesses? Here is a list of in my opinion the most relevant ones (the order does not imply any prioritisation).

For more details on this topic see my blog post "Pitfalls of traditional organisational change management".

There is an alternative: Lean Change Management.

Jeff Anderson and Alexis Hui (both Deloitte LEAN) started Lean Change Management in 2010 as an antithesis to the conventional change management approaches. In 2012, Jason Little joined the Lean Change community and published his variant of the framework. Today, Jason's approach is prominent and dominates the discussion.

Lean Change Management is an iterative and incremental, evolutionary, and empirical method for organisational change management.

Lean Change Management is based on the following principles. 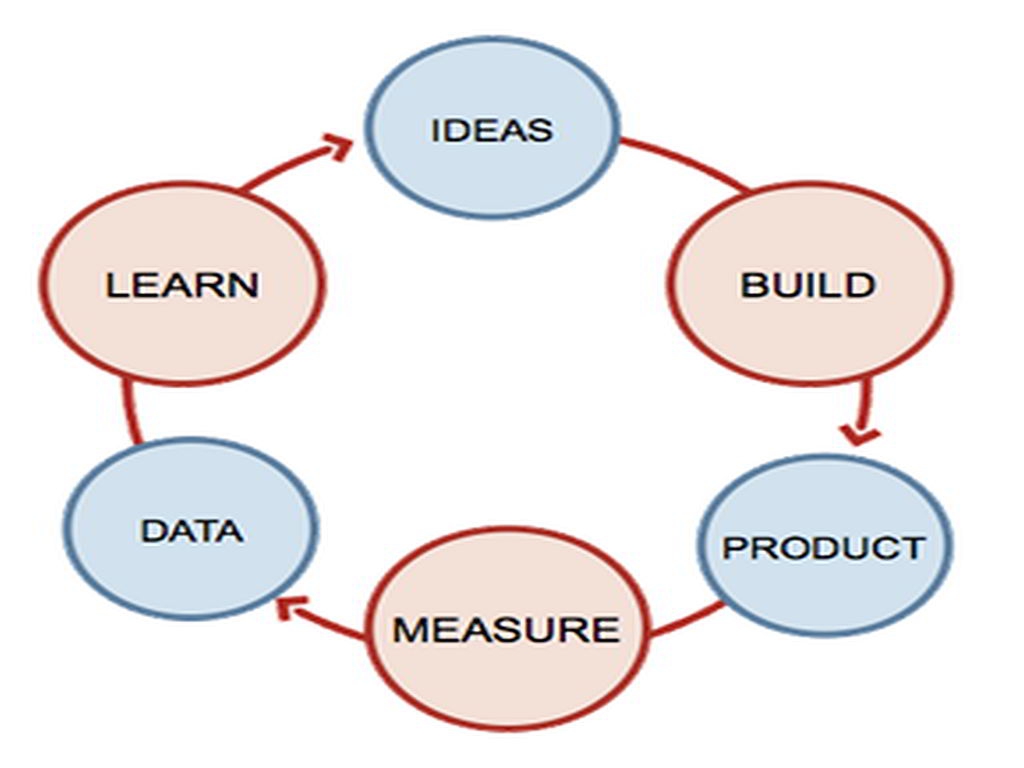 The Lean Change Management cycle consists of two loops. In the main loop, we gather insights about the needs to change, potential options to apply the change (application areas and the change recipients, i.e. people who change). And we set up to roll out smallest increments of possible changes that will enable learning to understand the viability of the change, so-called Minimum Viable Changes (MVC).

In the sub-loop we negotiate the MVC (change impact) with the selected target group, we create and develop the change, we probe it and we get further insights by continuous learning and measuring success or failure. The sub-loop we might run through multiple times up to a (pre-)defined limit. In reviewing our data, we decide about success or flop, about continuing, stopping or pivoting the change.

Options. – Identify areas of potential changes, based on the hypotheses; clustered by effort-value ratio.

Minimum Viable Change (MVC) / Experiments. – Generate from options the smallest applicable change, MVC.
Perturb the organisation by running the MVC as an experiment and validate/falsify your hypothesis.

The sub-loop is for running experiments:

Prepare. – This is the planning stage of your Experiment. Slice the MVC in as small as possible but still working parts. Build a hypothesis for start/end state. Define measures for the end state.

Introduce. – Implement a part of the MVC. You start working with people affected by the change.

Review. – Validate and adjust the hypothesis by the measurement results. Here you review the outcomes of the Experiment. Normally you do this after the amount of time you thought you would need for the change to stick.
Repeat the sub-loop until the MVC is completely implemented. Start the Lean Change Cycle next round with the new insights.

Negotiated Change is a central concept in Jeff Anderson's Lean Change Management. If the organisation communicates the need for change properly – addressing the Why? and the different levels of impact the change might have – change agents can then negotiate various dimensions of a change with the people being affected.

By negotiating about impact, measurements, ways to realisation, and success criteria of the change, the recipients of any change become co-authors and co-implementers of all aspects of the change. Negotiated Change transforms change recipients to change co-creators. Those that feel that their intentions are heard become over time true change participants and change owners. These empowered people will keep the change initiative on track.

In Lean Change Management there is no equivalent to a traditional roll-out procedure for change. Since the change implementation is always designed for a specific field of application (department, team, group) we can not easily "carry it over" to new, or even similar, application. However, progress can be measured and communicated by the short-term wins. It is the imperative of the organisation to communicate and to celebrate any wins that result from successful change implementation. Spread the news about the success and people from other areas will come to adapt your change in their domain. Empowered people will act by themselves, but it is the mandate of the organisation to support them in their new adaption. Thus, by adapting there is a self-promoting kind of roll-out.

Lean Change Management advocates that any change plan has to be described as a set of assumptions and that the change agents, change stakeholders and change recipients are responsible for validating those assumptions using explicit hypotheses. Validated learning is learning from data measured in experiments. It supports the notion of deliberate change planning without falling into the trap of fixed upfront design.

Validated learning is an empirical approach. It is evolutionary. By this, organisational leaders can implement a deliberate change, without locking them into a particular approach upfront.

Neither is a Minimum Viable Change (MVC) the final change with all the features full-fledged implemented. Nor does minimum implies small, little, tiny. – However, it may take some time to develop an MVC before you can probe it.

The MVC is the change with the highest return on investment versus risk. It has just those core features that allow the change to be deployed and to be used by the selected target group and nothing more.

A Minimum Viable Change (MVC) is the smallest possible change that will enable learning necessary to understand the viability of the overall change program.

"If we do X, we expect the result Y having the impact Z"

The scientific method states, that to validate assumptions we have to create hypotheses, which shall be probed by falsifiable experiments (written as statements that can be clearly proven wrong). Experiments are time-boxed – they will end in a pre-defined time. Creating experiments follow a distinct process:

Below you find an example of a typical hypothesis pattern:

We hypothesise by <implementing change C> that
we will <solve problem P>,
which will have <benefits Bi>,
as measured by <measurements Mi>
with success criteria <SCi>

Experiments can be viewed from two levels (Goncalves 2018). From a design perspective:

From a management perspective:

Implement the change by improvement experiments to validate that the change is viable. Since by Systems thinking organisations, departments, and teams are adaptive systems, any experiment successfully adopted will itself change the system. This new landscape provides us with the canvas to further experiment.

Nudging and Culture Hacking are two cornerstones to run experiments. ((Nudging is a concept in behavioral science, political theory, and behavioral economics.)) The basic concept of “Nudging” is that a relatively subtle policy shift – the “nudge” – encourages people to make decisions that are in their broader self-interest. A nudge makes it more likely that an individual will make a particular choice, or behave in a particular way, by altering the environment so that automatic cognitive processes are triggered to favour the desired outcome.

A culture hack is a small change exploiting a single area where your culture is vulnerable to change. Cultural hacks are small, emotional, immediate changes having big impacts. They are not quick fixes for "cultural deficiencies". It’s more about focusing on small things more frequently rather than only trying to tackle and change the big things.

The following examples illustrate the idea of nudging. 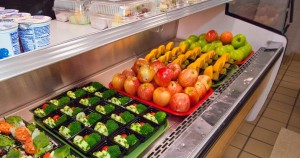 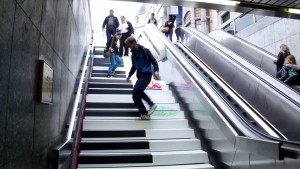 Essential is that culture hacks are small interventions to tackle a problem the culture has.

"Culture hacks are discrete, counter-cultural interventions aimed at changing how people interact with each other.

When they work, they can have a big impact. When they don't — no big deal, we can try something else."

"Culture hacks are easy — you should be able to design and carry them out in 48 hours."

You can use culture hacks in Lean Change Management to expose an organisation’s dysfunction to itself. It’s a great, and visual, way to prioritise the Options in the Lean Change Cycle. And, secondly, it is a strong metaphor for each change agent.

For more details read my separate blog posts on Nudging and Culture Hacking.