Main Takeaways
Reading Time: 7 minutes Culture hacking at its best is about creating organisational or team cultures that enable people and teams to achieve greatness. A culture hack is a small change exploiting a single area where your culture is vulnerable to change. Hacks are small, emotional, immediate changes having big impacts. They are not quick fixes for "cultural deficiencies". It’s more about focusing on small things more frequently rather than only trying to tackle and change the big things.
Culture Hacking is a cornerstone of the startup scene and lean change management.

The Origins of Culture Hacking

You never change things by fighting the existing reality.
To change something, build a new model that makes the
existing model obsolete.

Original, "hacking" is a word from journalists' language and means "doing journalist's work in an unusual way". Later it was transferred to IT, computers, programming, and operating systems. The notion "Culture Hacking" in particular, stems from modern art where it means to provoke existing cultural standards and to break down traditional to bring up cutting-edge new.

Culture Hacking 1 was initiated 1998 by Jim and Michele McCarthy with their famous Core Protocols as a systematic design and implementation of team practices and commitments. ((The so-called Core Protocols are a set of best practices to become an exceptional team. They enable people and teams to learn results-oriented behaviour, to enter a state of shared vision and stay there focused, to trust each other, to stay rational and healthy (so-called psychological safety), to make decisions effectively, and to keep moving toward the team’s goals. The Core Protocols are linguistic patterns of human behaviour to support teams in collaboration, communication, and commitment to the common goal. As rules and guidelines, the Core Protocols describe how to behave properly as a team, in meetings, and in interpersonal interactions.))

"Culture Hacking is the systematic design and implementation of team practices, commitments, and viewpoints that yield desired results. In other words, it's about hacking your own culture. [...] Culture hacking at its best is about creating cultures that enable people and teams to achieve greatness."

At the same time, other frameworks emerged as well, like Scrum, or Lean Software Development.

Cultural Hacking 2 arose in 2012 when Stefan Haas held his workshop at the LESS 2012 conference in Tallin. Since then, cultural hacking became a very prominent concept in the Agile community, in the startup scene, and especially in Lean Change Management. With Culture Hacking 2 a new interpretation of culture hacking emerge.

In the new meaning, a culture hack is a small change exploiting a single area where your culture is vulnerable to change. Hacks are small and emotional. Immediate changes show big impacts. Culture hacks are not quick fixes for "cultural deficiencies" in the system. It’s more the agile mindset about focusing on small things more frequently rather than only trying to tackle and change the big things.

"Culture hacks are discrete, counter-cultural interventions aimed at changing how people interact with each other.

When they work, they can have a big impact. When they don't — no big deal, we can try something else."

"Culture hacks are easy — you should be able to design and carry them out in 48 hours."

Why We Need It — The Benefits of Culture Hacking

In the last decades, organisational change initiatives became the crucial touchstones for each CEO. If you ask a CEO which is the biggest barrier to change is in their organisation, the most common response is almost always culture. In the traditional sense, culture is big, unwieldy and hard to change.

But, that is not the fault of organisational design. For sure, you have to and you can change organisations. Per se, people do not resist to change. They resist only to dumbly set up change initiatives forcing them to change.

In another blog post, I explain the main failures in traditional change management which is to tackle complex problems with instruments you apply for complicated problem-solving. In complicated problems you sense, analyse, and respond — you can plan and manage change. In complex issues this does not work: you can only probe, sense, and respond. This is a simple learning from the Cynefin Framework.

Here comes Culture Hacking in. Hacking in its generic form has innovation, disruption, and emergence inside. White Hacking — the good side of hacking — tries to understand and to challenge a system by small destabilisations and interventions with the goal to bring up cutting-edge new. The contrast is the evil side, Black Hacking, where you try to break down the system with all costs.

The charm of Culture Hacking is its ease to trigger wide and sometimes opposing attitudes and ideas to create something new in your (corporate) culture. A culture hack is a small change intervention exploiting a single area where your culture is to change. You can apply a culture hack fast and quick, with small effort. By its semantic provenance (= computer hacking), culture hacking always implies its genuine inherent attributes: playful experiments to perturb an unknown order to understand how it reacts and to create something new. ((As Düllo 2005 explains, Culture Hacking incorporates aspects of

Culture hacks are suitable means to prevent the pitfall of traditional organisational change management: the long and exhausting upfront planning. Culture hacking is not finding weak points to break into a system illegally, like Black Hacking. Instead, it is White Hacking the cultural system, to find vulnerable points in your culture and turning them into real change that sticks (Kristin Moyer, Gartner VP, at Gartner 2018 Symposium/ITxpo in Orlando, Florida.)

Culture hacks are not goal-oriented interventions where the target state is planned upfront in great detail. Instead, the hack is a systemic trigger to the system to change itself. Culture hacks are more experiments in the Lean Startup or Lean Change Management sense. You hypothesise a certain cause-effect relationship in the systems' behaviour and the hack tries to trigger this behaviour.

Don't be disappointed if a hack does not work. Since it is an experiment, there is no success guarantee. If the hack doesn' t work, don't worry. Modify it or try a new one, instead.

Here is the Culture Hacking Procedure in more detail:

Very important in Culture Hacking is that the system does not identify the hack as an external stimulus, rather than an internal one. Adaptive systems tend to react with immediate resistance to external interventions.

Culture hacks are context-sensitive. You can not re-use culture hacks. What works in one field of application does not necessarily work in a related domain. Or, after the hack, the system shows none or a quite different behaviour than the intended one.

Culture hacks can be dangerous to the system and to the hacker as well. There is a wide bandwidth from hacks being too weak to affect the systems and hacks breaking it down. From hacks with no or huge legal punishment, the hacker can be impeached.

You have to have to find the sweet spot between vulnerability and effort. Thus, one challenge is very easy: choose the culture hack with the most impact and few efforts. 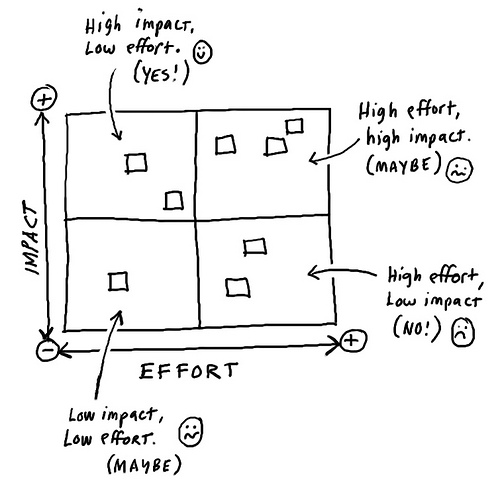 There is a simple risk assessment for the vulnerability issue. Perform a variant of Bull's Eye evaluation. Draw three coloured circles: 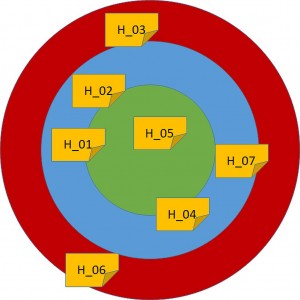